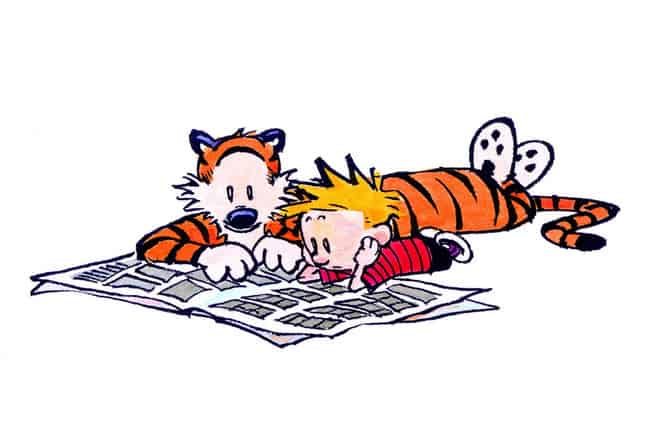 “Life’s too darn short to waste time trying to please every meddlesome moron who’s got an idea how i ought to be. I don’t need advice. Everyone can stay out of my face. Resolutions? Me ? Just what are you implying? That i need to change? Well buddy as far as i’m concerned, I’m perfect the way i am ” 😀

Now this is exactly what i believe. But these are not my lines. These lines are from a hugely famous comic strip – ‘Calvin and Hobbes’, which have me literally glued to them these days. I’ve not really been a fan of comics, not even when i was a child. However recently, i happened to go through a few  ‘Calvin and Hobbes’ comic strips and I loved them. Just loved them.

Calvin is a six year old boy (he does grow as the series proceeds). He’s a smart kid. In fact way smarter than his age. Hobbes is his beloved tiger friend and as i see it, represents Calvin’s conscience. Personally, its easy for me to identify with Calvin who constantly feels out of sync with the rest of the world, and thus retreating to the world he creates for himself in his mind. Calvin  truly expresses the idea that even without being preachy, priggish and mushy, it’s  okay to be different.  It’s exhilarating to see a comic strip that gives a subtle message about the world around.

‘Calvin and Hobbes’ is not just a comic strip replete with third degree jokes. It’s a piece of art and it’s creator – Bill Watterson is the ingenious artist.