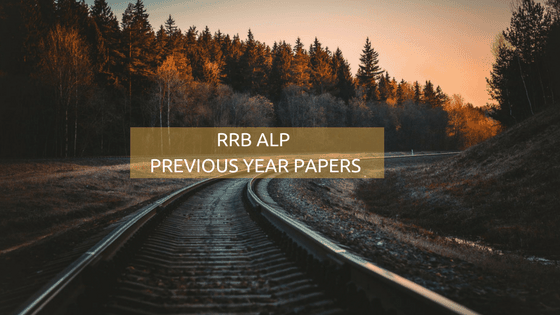 Practicing RRB ALP previous year papers will help you understand the nature and level of the exam. A key component of preparation of the RRB Assistant Loco Pilot examination is to practice its past year papers.

Solving the RRB ALP previous year papers will help you evaluate your preparation. This will help you get an insight into your strong and weak areas. Depending on the score you get after solving the papers, start improvising. You should focus on amplifying your strengths and reducing your weaknesses.

There exists a methodical way to solve the RRB ALP previous year papers. Random attempts and guess work will not help. You need to formulate a proper strategy to solve the past year question papers or even model papers.

The RRB ALP recruitment notification has been released after 3 years so make sure you avail the opportunity.

The internet is loaded with fake papers from previous years. Uploading such material is not just unethical but also unfair to the aspirants. An attempt has been made by me to do a thorough research across the web and consult certain successful aspirants from the years 2014 and 2012.

After careful consultation, the subsequent papers of RRB Assistant Loco Pilot examination have been uploaded below. The source website is Testbook.

Once aspirants are done practicing the RRB ALP previous year papers, it is highly recommended that they continue solving other model papers as well. The more you practice, the more grip you will have over the exam.

Some of the most useful RRB ALP Model Papers available are –

Speed Tests are a ‘must do’ thing once you are done completing the RRB ALP previous year papers and model papers. They will assist you not just solving questions but keeping a track of your time.

Some of the most useful RRB ALP Speed Tests are –

Here is a recommendation –

Once you’re done solving ample amount of questions from previous year papers, model papers and speed tests, head straight to solving mock tests. This should be your final evaluation before the exam.

There are various players in the market that offer you RRB ALP mock tests. But here’s what I will suggest you –

Things Not to Do While Attempting RRB ALP Previous Year Papers

Care should be taken to not indulge in certain practices while attempting the RRB ALP previous year papers. Else, no point of investing time and attempting.

There are many advantages of solving RRB ALP previous year papers –

How to Make Efficient Use of RRB ALP Previous Year Papers ?

To ensure that you benefit from attempting the RRB ALP previous year papers, you should invest some time for self evaluation. Just solving papers will not prove useful. Sit on your mistakes and try not to commit them in the actual exam.

The whole point of solving questions from RRB ALP previous year papers is to score well in the actual exam. So unless you learn from the type of mistakes committed, the whole exercise will prove futile.

With each paper attempted, your score should improve. This is the best way to check whether the RRB ALP previous year papers are helping you or not.

As per the official notification, there will be two stages examination (First stage CBT and Second Stage CBT) common for ALP and Technician.

In addition , candidates who have opted for ALP and qualified in Second Stage CBT have to undergo Computer Based Aptitude Test (AT). Marks will be normalized in all the stages of exam.

Stop wasting time and start practicing. Remember that Indian Railways has issued this recruitment drive after a gap of 3 years. So make this attempt count and avail the opportunity.

All the very best !!

THE CURRENT ARTICLE ENTITLED, ” RRB ALP PREVIOUS YEAR PAPERS: METHODOLOGY TO PRACTICE & TIPS ” IS AN EXCLUSIVE PROPERTY OF CEREBRATION. ANY INDIVIDUAL OR ORGANIZATION INDULGING IN ANY FORM OF PLAGIARISM WILL BE DEALT WITH STRICTLY. IF YOU WANT TO INCLUDE INFORMATION FROM THE CURRENT POST TO YOUR WEBSITE, KINDLY QUOTE THE SOURCE AND AUTHOR