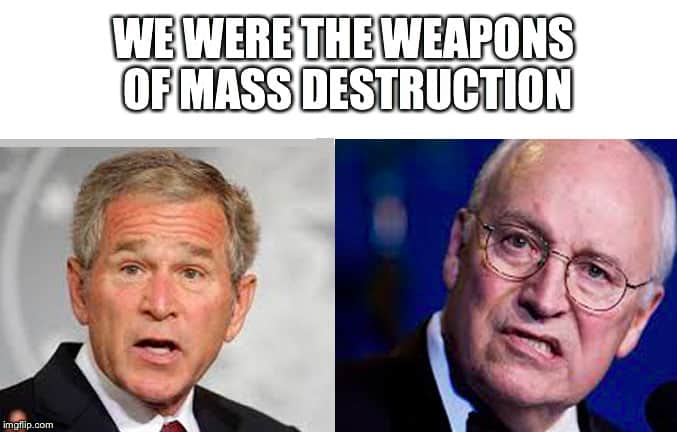 Once upon a time, there was a country which was known as the ‘Cradle of Civilization’. A country whose civilization flourished long before those of Greece & Rome. A country so beautiful that the Hellenes would have blushed. A country , that despite being mostly arid was bountiful with vegetation, good weather, abundant wildlife, and water resources. A country with a far more literate population than the surrounding countries of the middle-east. A country which gave to the world inventions like the first accurate calendar, the wheel, maps and most importantly the first schools. A country where women had traditionally more freedom than their counterparts elsewhere in the region. A country that is home to the world’s second largest oil reserves. Lastly, a country that is now unfortunately burning in flames with millions of lives lost and thousandothers rendered homeless. I’m referring here to the Republic of Iraq .

The world at large has always seemed interested in Iraq especially, the United States ( All thanks to the Iraq’s rich oil reserves which have the potential to make its leaders extremely powerful ). U.S has intervened in the past and there is now a possibility of a third intervention. The current situation in Iraq can prove deadly for a lot of countries including the United States. It’s ethnic and sectarian divisions have deepened even more this time. Plus its neighbourhood comprising Syria is not doing well itself. If US intervenes this time, it might end the fanatics but not the fanaticism of the region. Last time US did defeat the Al Qaida forces in the region but didn’t destroy them and today the entire region is witnessing a dangerous uprising because of a lethal terrorist organization called the ISIS (Islamic State of Iraq and the Levant) which is horrifically violent. ISIS was basically a part of Al Qaida group but became much more powerful after Laden’s death, and today it’s the wealthiest and the most deadly terrorist outfit in the world.

I personally feel, had the George. W. Bush administration not attacked Iraq in 2003 in search of ‘Weapons of Mass Destruction’ (which were never found by the way because there were none and this was a fact confirmed by the top Intelligence agencies of the world) Iraq would be in a much better spot today. As for Saddam Hussein, he would have made sure that terrorist groups like ISIS don’t take over Iraq. What was the whole point of being at war with Iraq and capturing its leader, when the situation now is even more grave ? It amazes me as to how an organization like ISIS became so powerful when all this while the US forces were in Iraq? Iraq had its problems even before the US intervened but the country was still liberal in a lot of ways. Now the radical groups from Saudi and other adjacent countries have taken over and the ISIS wants Iraq to become an Islamic state. The invasion of Iraq was completely erroneous and the political advisors of the Bush administration were misguided. I agree that the Bush government did get rid of a tyrant dictator but it also killed way more innocent people than even Saddam Hussein killed. People were killed in the name of insurgents, when in actuality they were innocent women and children. The public mind in USA was brainwashed, convincing people that it’s a war on terror  a retribution for 9/11 and that invading Iraq was in the best interest of the world. But the question is was it ?

I mean the US government that time fooled its people and the world, claiming that Iraq is under the rule of an unstable and dangerous leader so an invasion is the need of the hour. I’m going to give a case here of an exactly similar leader. But I can vouch neither the US nor the rest of the world will dare touch either him or his nation. I’m referring here about North Korea and its supreme leader Kim Jong un. Try doing it to them and the repercussions would be fatal. Thank goodness that North Korea doesn’t have oil , otherwise there was just no stopping that nation.  Anyway, my point is that the entire exercise of the Bush government attacking Iraq is rendered moot since an extremely beautiful and prosperous nation has over the years turned into an absolute disaster. A civil war can break down any moment now. There are people from various nations either trapped, abducted or executed. There are children who might have otherwise been intellectually and creatively curious but are now orphaned. There are women who once enjoyed a liberal atmosphere where they could educate themselves and make progress but are now either killed or trafficked into prostitution. There are men who should have been busy working a livelihood for their folks but are now being mass executed right in front of their families. Lastly, there is the youth who should have been watching the FIFA World Cup right now ( since football is extremely popular in Iraq) but are now holding arms and ammunition.

Saddam Hussein might have been the craziest of leaders but the man knew the geopolitics of Iraq. He was the impetus behind turning Iraq from a mere Arab nation to the most advanced Arab country in history. Iraq was always better than its neighbours. Healthcare facilities were excellent. Education was imparted right from the primary level up to the university, completely free of charge. Iraq was a nation where more human rights were granted to its citizens than any other Arab nation, especially in the areas of religion and liberation of women. The New York Times had thus, once called Baghdad “The Paris of the Middle East. Toppling Saddam Hussein was the biggest misstep US committed and now Iraq has to face people, I call pre-historic barbarians . I’d never thought a day would come when I’d have to support a man like Saddam Hussein over President Bush. Sometimes, I feel that the biggest Weapon of Mass Destruction in Iraq was Mr. President himself. The day Saddam was caught President Bush had said, ” the world will be better off without you, Mr. Hussein.” Today Iraq has gone worse, and so has the world. 🙁