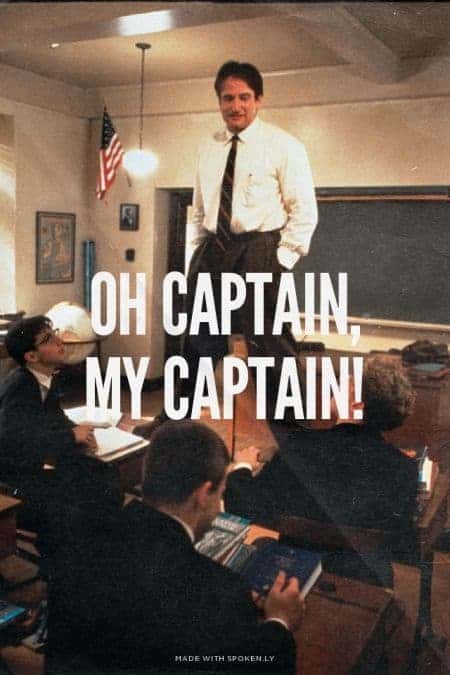 Woke up today to the extremely sad news of Robin Williams’ demise. The news of the veteran actor’s suicide is heart breaking and agonizing. Robin Williams’ was one of the few actors whose performances left the audience in awe of him. His movies have left an everlasting impression on so many people across the world. His performances will always remain relevant for all times to come no matter what the era because the messages conveyed to the audiences through his performances are eternal. I first watched him in the critically acclaimed movie ,’DeadPoets Society'(i’ll always be thankful to my brother for making me watch a superb film like this). What a movie and what a performance by Robin Williams. His character of the inspiring teacher Mr. John Keating is beyond words. His craft moved many including me. It made millions cry and more than that convinced us to re look at our lives and the way we were living it especially with dialogues like , “Carpe Diem – Seize the day boys, make your lives extraordinary” or “You must strive to find your inner voice because the longer you wait to begin the less likely you are to find it at all” or “You must constantly look at things differently.” I mean the movie left such an impact that i literally am using the dialogues as quotes because i remember them. I also loved him in the very brilliant ,’Good Will Hunting’ where he plays the role of a therapist. The man even won an Oscar for his performance in the film. I can go on here about a lot more actually. The point is that his performances were just breath taking. Even better is the fact that Robin Williams was not just accomplished celebrity but a deeply humble man.

The social media is flooded with tributes for him and the kind of tributes he’s receiving shows that Robin Williams touched a million hearts. People are genuinely gutted by the news of his suicide.They are in denial that how can a man as talented and inspiring as Williams commit suicide. His own fraternity is also in deep shock. Some of the tributes by the people of his own fraternity on Twitter are worth mentioning here:
STEVEN SPIELBERG – “A lightning storm of comic genius and our laughter was the thunder that sustained him. He was a pal and I can’t believe he’s gone.’
BEN STILLER – ” A tweet cannot begin to describe the hugeness of Robin William’s heart and soul and talent.This is so sad #RobinWilliams… Ok i’ll try. I met him when i was 13 and a huge fan and he was so kind and i watched him be kind to every fan i ever saw him with…And with other actors he was generous and brilliant. He made everyone feel special and equal around him even he was the genius.”
ELLEN DEGENERES – “I can’t believe the news about Robin Williams. He gave so much to so many people.I’m heartbroken.”
..And there are many more across the digital spectrum. Shows the agony his death has caused to so many people.

Robin Williams will always rule our hearts. He will always be remembered because he has truly won our admiration. The world will always mourn his death. As a tribute to the great man, i feel like standing on the desk like the character of Todd did in ‘Dead Poets Society’ when Robin Williams (Mr. Keating) was about to exit and just as Todd calls out “O Captain! My Captain” so do i.

REST IN PEACE OUR CAPTAIN.